Post-stocking yield-Stocked fishes, particularly catla and mrigal, of one year age, commenced to come in the landings from January 2010 increasing the total yield in 2010 and 2011. The unstocked varieties were sub-dominant, chiefly consisting of native fishes, viz, Amblypharyngodon mola, Gonoproktopterus curmuca and Puntius sp. The recapture of scampi was poor in spite of their good growth and intensive stocking (Fig. 27). In 2010, the catla yield recorded 1610 kg and for mrigal it was 3014 kg. 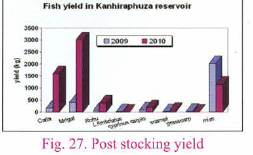