Kanhirapuzha is a low productive reservoir by virtue of its oligotrophic nature. It is a culture based reservoir, which depends on artificial recruitment for enhancement of fish production and natural productivity for growth. The indigenous fishery poorly supports the total yield. Its fish production potential was estimated at 159.4 t (309.7 kg per ha) as per the conversion of primary production to fish yield which was 0.013% against potential conversion rate of 1.2% suggested by Odum (1960). The maximum yield attained during these years was only 11743.8 kg (25.98 kg per ha) in 1991. Enhanced yield may be achieved through better management measures including optimum stocking size, stocking density, species composition and effective harvesting practices.

Hence formulation of new management strategies based on the scientific data is essential to improve the fish yield from this reservoir. Meagre catch led very few fishermen venturing into fishing as a part time occupation to obtain a minimum catch of 3-4 kg of fish per day. Fibreglass coracle and HDPE mono-filament nets are the main craft and gears used only in few selected reservoirs including Kanhirapuzha. There is an ample scope of improving the production through appropriate management strategies to achieve reservoir’s fish production potential. 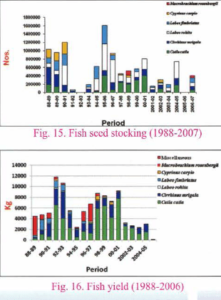 Kanhirapuzha is a perennial reservoir with no water scarcity. This favours the fishes to grow till the marketable size round the year with no impact of seasonal fluctuations of water level. Carnivorous fishes are absent in this reservoir aiding the reduced predation to stocked fishes. Local demand for Kanhirapuzha reservoir fish is very high for their unique taste. All these merit the Kanhirapuzha reservoir for the development of culture based reservoir. This reservoir is arbitrarily stocked with fries and fingerlings of major carps of variable size and numbers. Hence it is essential to stock the reservoir with CIFRI recommended optimum size of 100 mm fingerlings (Selvaraj et al., 1995). To stock the reservoir, 10 em size fingerlings were raised in both land based and reservoir in-situ nursenes.

(a) Land based nurseries:

Adjacent to the reservoir, 11 nursery ponds covering an area of 2.3 ha owned by Irrigation department of Kerala was cleared of weeds to stock the spawns of IMC. Bundhs were constructed and pipes connecting the ponds inlets and outlets were laid. Ponds were filled with water from the adjacent canal to test its water retention capacity. These nursery ponds were utilized to rear fingerlings upto stockable size (10 em) by regular manuring with cow dung @ 1000 kg/ha and lime @ 100 kg/ha which promoted the growth of plankton in the ponds.

Supplementary feed with a mixture of rice bran (60%), groundnut cake (30%) and soya meal (10%) was provided twice daily to the fish fry. Four lakh fry of Catla and 3 lakh fry ofMrigal were purchased from private hatchery and stocked in nursery ponds to grow upto stockable size. Seeds are harvested in drag nets and about 10 em size fingerlings segregated and accIimatised in the adjacent river in hapa nets and then released into the reservoir.

The seed rearing was also attempted in two cages of size 4mx4mx2m fixed in open reservoir where water circulation was less. The cages were fabricated out of the HDPE woven material (40×40 mesh/inch). These set up were fitted firmly with the bamboo poles and secured at the bottom and the tops of the nets are fastened with the strong branches of the trees. About 300000 nos. of 3 day-old spawns of common carp were stocked but unfortunately the nets collapsed during October 2009 following heavy monsoon ram.

Stocking of IMC seeds by external agencies A total of 465401 carp seeds and 5 lakh scampi seeds were stocked during this year (2008-09). A total of 6840 1 nos. of fmgerlings of 9-10 em size (4006 nos. of catla and 64395 of mrigal) were also stocked by CIFRI. Meanwhile the NFDB, Hyderabad had sanctioned the financial assistance of 8.50 lakhs to Kanhirapuzha reservoir to stock fingerlings at the rate of 2000 nos.ha’. The local zilla parishad under backward region grant fund has also assisted financially to the Fishermen Co-operative Society to stock 5.0 lakh scampi seeds. The stocking details for 2008-2009 and 2009-201 0 is presented in Table 7 and 8.

The growth rate of fingerlings of Indian major carps stocked in Kanhirapuzha reservoir were studied by length weight measurement of fishes collected by experimental fishing. The fingerlings were stocked at the density of 909 nos.ha’ and 1696 nos.ha’ during 2008-2009 and 2009-2010 respectively. Among the fishes stocked, the catla and mrigal were recaptured in considerable numbers. The length weight data on temporal basis were collected for seeds of cohort stocked during 2008-2009 by experimental fishing for the preliminary estimates of growth parameters. Analysis of length frequency data and population dynamics of stocked fishes The length frequency composition of Catla catla and Cirrhinus mrigala and their increase in weight at monthly intervals are given in the Fig 13,14 and 15, respectively. 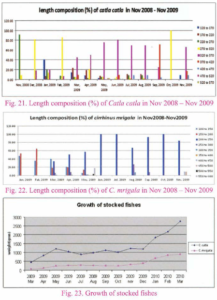 month, 2500 g after 18 months of stocking which is better than the mrigal growth. Cirrhinus mrigala attained 200 – 250 mm in length corresponding to weight ranging 180 to 390 g at 7thmonth and this length group persisted in dominance in the succeeding 8 months. The growth of mrigal is comparatively very low  and they reached an average of800 g after 18th month from stocking time. The recapture of Labeo rohita were negligible (8 nos.) indicating stocking this species in this reservoir is ineffective. The stocking of Grass carp was also unsuccessful for there was no recapture of this speciesd uringexperi mental fishing. Recapture at the 7thmonth started from stocking and subsequent months serially numbered in the X axis of the figure 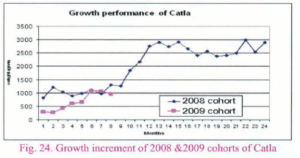 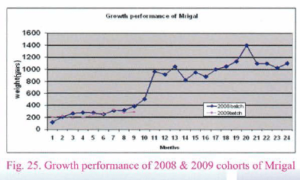 Estimation of optimum stocking density offish fingerlings The length frequency data were analysed for estimating the population parameters for the Catla catla and Cirrhinus mrigala of 1st cohort using FISAT II software. The growth coefficient (K/yr) was assessed through VBGF model and it was 0.73 for catla being better than mrigal (0.33). Similarly the asymptotic length (L(0) by ELEFAN II software determined. The asymptotic length for catla is 1066 mm at the stocking density of 89 nos. ha’ and mrigal, 886 mm at the stocking density of 368nos.ha-1 • The total mortality (Z) was calculated by length converted catch curve and it is 4.3 for catla and 0.59 for mrigal. Pauly’s empirical formula was used for estimating the natural mortality (M). Fishing mortality (F) [was estimated from total mortality and natural mortality] (F = ZM).

The growth performance index was very good for catla being 5.89 and for mrigal 1.78. The VPA and cohort analyses by Jones predicted the biomass available for exploitation for catla and mrigal were 18.7 t at mid length 510 mm and 123.0 t at 460 mm, respectively (Fig.26). For the optimization of stocking and harvesting regimes at the Kanhirapuzha reservoir, Lorenzen’s (1996) von Bertalanffy growth model was used for analysis of the data to find out the optimum stocking density of Catla catla alone to stock in this reservoir. The length weight frequency data collected for the two years were subjected to the Density dependent Growth Model proposed by Lorenzen (2000). The output established that at the combination of fishing mortality (F) of 1.8 – 2.1 and stocking rate around 350 nos. ha’ would fetch the maximum fish production 90 kg/ha’ from this reservoir (Fig. 26).