G. curmuca is one of the dominant native fish observed in the daily fish catch of Kanhirapuzha reservoir. It is an omnivorous, gregarious species that normally occupy deep waters in the rivers of the plains or in deep and coolpools in hilly regions and as adults migrate to smaller tributaries and streams for spawning. The species is seen mostly along the banks of rivers. It attains a maximum length of 30 em, is a bottom feeder, and hence have a suitable downward facing mouth. Adult males develop
tubercles on the snout. It is known to breed after the south-west monsoon months, from June to August.

The length and weight of the fish ranged from 175 to 352 mm and 40 to 470 g respectively in the fish samples collected under this period ofstudy. The length-weight relationships of male, female and both sexes were analysed and the linear equations are for 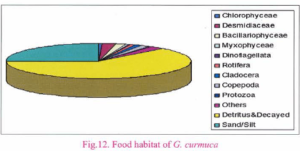 Atotal of225 samples of Puntius jilamentosus, ranging from 78 to 200 mm in length and 6.0to 250.0 g weight, were collected from the catches of the reservoir at monthly intervals from April 20 10 to March 2011. The coefficient of determination, the R2 values obtained were significant at 1% level.

Five ovarian development stages from immature, early maturing, advanced maturing, ripe and spent were observed and the cycle repeated twice in a year with ripe stage conspicuous in May-June with high fecundity while in October to February it was sporadic with comparatively less number of ova. The Gonado-somatic index (GS1) attained peak during June (9.6) and January(8.1) and the mean value for the period of study was 3.7.

The gut content revealed that detritus (85%) occupied the major portion followed by sand (3%). The contribution of chlorophyceae, bacillariophyceae, desmidiaceae and myxophyceae were evenly distributed at 2% share. 32 genera of plankton were recorded from the gut, out of which 25 are phytoplankton and 7 are zooplankton. Chlorophyceae was dominated by species of Monostroma, Cladophora and Microspora. Dominant among bacillariophyceae were Navicula sp., Nitzschia sp. and Synedra sp. Microcystis contributed major portion of myxophyceae. Among zooplankton, rotifers outnumbered copepoda and cladocera and dominant species are Polyarthra sp., Brachionus sp. and Tricocerca sp.